Jiddat Web Desk  ::The main Mingora-Kalam road at Dumra has been closed for traffic due to the land sliding and fall of an avalanche during heavy downpour and snowfall on Monday.

The spokesperson of the Relief and Settlement Department told the media on Tuesday that Kalam road has been closed for traffic due to the fall of avalanche and land sliding at the Dumra area. Heavy machinery has been mobilized to clear the road as quickly as possible for traffic.

The snow clearance operation in all approached roads at Kalam, Malam Jabba, and other scenic areas of Upper Swat was expedited and efforts were underway to complete the operation as quickly as possible. The department is in close touch with the district administration in this regard.

Meanwhile, the scenic Kalam Valley in Swat district has received a maximum of 50 millimeters rain and 25-inch snowfall during the recent heavy showers. The Relief and Settlement Department report on Tuesday that Dir has received 43mm rain and Dargai Malakand 41mm.

Mainly very cold and dry weather is expected in most parts of the province while partially cloudy in upper parts of KP including, Hazara and Malakand Divisions. Frost is expected to set in overnight across the province that would drop the temperature further down. 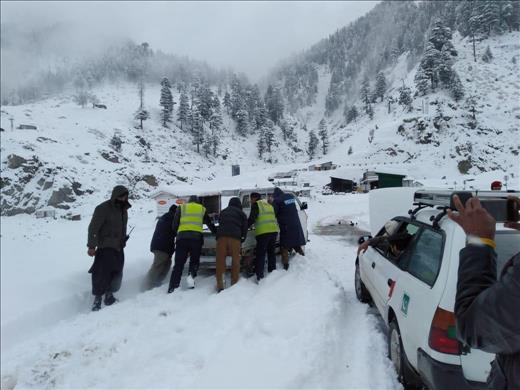